Among the myriad locally-crafted gifts filling the shelves in the Rocks Marketplace is the artful pottery made by Joan Hannah. Joan grew up in nearby Sugar Hill, and after a 26-year hiatus to Vail, Colorado, returned to her roots to run the family’s farm, which she did aptly from 1992 until selling the property in 2001. She’s an Olympic (1960, 1964) and World Championship (1962, 1966) ski racer, a hardy Yankee farmer, and a skilled artisan. 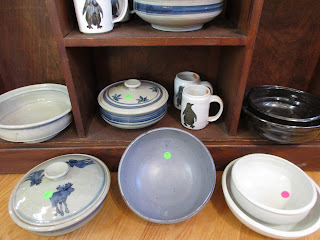 Joan began making pottery during high school, studied the art at Bennington College, Mills College, and the California College of Arts and Crafts and later at the Kansas City Art Institute. Her mother was an accomplished sculptor, and both parents were skilled ski racers, both talents Joan has carried on. She is likely the only artisan we work with at The Rocks who has graced the cover of Sports Illustrated, which she did in February 1962, the year she won a bronze medal in the World Championship giant slalom. She’s also a member of the U.S. Ski and Snowboard Hall of Fame.

Joan spends much of her fall and winter working with clay in her Sugar Hill studio, just down the road from the farm where she grew up, creating her signature bowls, mugs, casserole dishes and other beautiful pieces. Here, she explains a little bit about what goes into her pottery…

How did you get started making pottery?
I took sculpture and pottery in college and had the same teacher as Mother. I chose pottery because I can make things that are functional, and it’s something I can sell. I enjoy working with clay, and through many years of study and practice in making pottery, I continue to enjoy the challenge of creating interesting, useful pieces. It’s fulfilling to start with a block of clay, envision a piece, and work to create the finished product that someone will use in his or her home.

Your pottery is also beautiful, though, beyond being practical.
My ceramics are very classical in shape. The shape is the art. It’s not just a palate to paint on.

How have you balanced making pottery with your other work? You were a ski instructor at Vail for 26 years, and when you came home you were running the farm and caring for your mother.
When I first went to Vail in 1968 I rented a space in a studio. Then I set up my own kiln and worked with other potters. When I lived there, I made pottery in the summer. When I came back to the farm, I kept making pottery to keep myself busy when I wasn’t farming. Now I don’t make pottery in the summer. I play golf and have my own gardens with too many vegetables. In the winter I teach skiing two days a week at Loon and ski Saturdays at Cannon with the masters racing program. I make pottery in between.

What does the process entail, from start to finish?
Well, I start by buying a ton of clay. That gets me through a winter season. I have to knead it before I throw it on the pottery wheel. Then it has to dry for a day, and I trim it and dry it more over the furnace. It gets fired first in the electric kiln. I make all my own glazes and stencils. After a piece is glazed, it gets fired for 12 hours in the big propane-fired kiln. I have a 1,000-gallon propane tank, which I need because the kiln burns a million BTUs an hour when all the burners are lit. The temperature gets up to 2,400 degrees Fahrenheit. It’s a long process. The mugs I made yesterday will be done by January, maybe December if I’m lucky.

For shoppers at The Rocks Marketplace, there's no need to wait for the next batch of Joan's fabulous wares – our shelves are stocked with her beautiful pottery, from mugs and bowls to casserole dishes and syrup pitchers, along with a wonderful array of gifts from artisans down the road and throughout the New England region!

Shops at The Rocks are open daily (closed Thanksgiving Day) from 10 a.m.-4 p.m.
Posted by The Rocks Estate at 6:02 AM